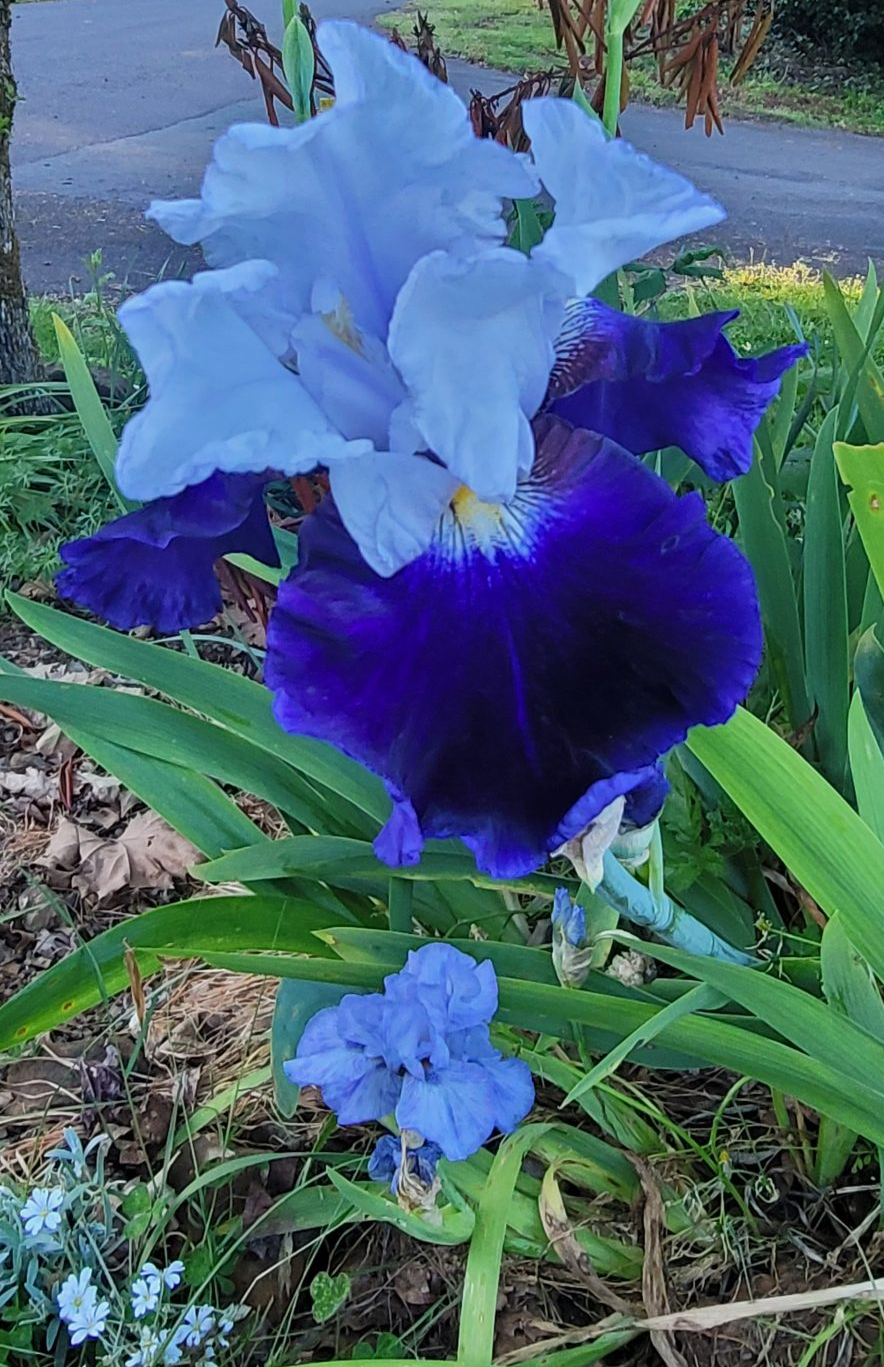 This was our first FULL day at Disneyland.  It started out with a family breakfast at the IHOP down the street from our hotel.

Uncle Chuck is always THE BEST to have around when there are little ones that need entertaining. He turned the empty placard holder into a television and that kept them busy and amused until breakfast arrived. A majority of the wee-ones ordered these very happy looking pancakes and then proceeded to each only eat about 3 bites.  We decided we probably could have ordered one plate of them and split them between the 7 littlest ones and still had left overs.  They were excited to get into the parks.

We didn’t just have tickets for Disneyland, but also got park-hopper passes.  This allows access to both parks, Disneyland and California Adventure. (something I HIGHLY recommend) This morning we started in the California Adventure Park, specifically in Radiator Springs!  This was probably the biggest group favorite “mini-theme” area of both parks.  If a cartoon could become “real” this was great example. Barrel Cacti were planted among  the tail-fin-light flowers. Our second favorite ride here was the tractor pull ride. Not only was it fun to ride, but it was also pretty cool in the way that it worked. I would have gotten more pics of the family in the other carts, but they were super blurry and you don’t want to see that.

In Radiator Springs there was a little snack/rest area that had these beads hanging down, almost as an aside to the actual area.  The boys really liked them and were kept busy for quite a while.

Leaving Radiator Springs we headed over to Pixar Pier.  One of the challenges that we did have on this trip was that some of our family members were not tall enough to ride on all of the rides.  One of the ones that most of the little ones could ride on was this rocket ride.  A bonus for me was I am a whimp and it wasn’t a roller coaster.

My grand-boys had been hanging out with me because their mom and dad slept in and had a later breakfast.  Then they met up with us while we were waiting for the larger group to exit the roller coaster or the scary ferris wheel, I’m not sure which.  J, H and E decided to get in line for the Incredi-coaster.  L was too little, and you already know how I felt, so we headed over to get some snacks and wait.

As we were enjoying our goldfish crackers, L looked over at the carousel and said, “I want to ride on that”.  I was surprised to say the least.  He had been ho-hum about which rides he wanted to go on until now.  So, you bet that grandma got him in line to ride the carousel!

About this time it was getting close to lunchtime and naptime.  We decided to head out of the parks and back to the hotel for a little rest. This is only “The Happiest Place on Earth” as long as party members aren’t melting down due to being over tired or over stimulated or both. (this goes for adults as well as children). On our way out of the park, we were stopped by Molly Messenger!

Molly called to the boys, saying that she had a message for them.  She told them the story about how she had been looking for them to give them these messages.  She doubled checked their names by asking them what they were and wrote their names on the messages before handing them to the boys.  E’s message was from Goofy and L’s message was from Buzz Lightyear.  This was the best character interaction the whole trip.  It was spontaneous and the interaction got both boys out of “themselves”, so they didn’t have time to thing about being too shy.  Pretty fun.

Back to the hotel for naps and swimming.  This picture shows how the hotel looks like a castle.

Upon returning to the park, later that day, the majority of the group decided to ride the Jungle Cruise.  The guide on our boat made it especially fun with her dry presentation of her ridiculous  jokes.  She really sold it!

Remember the “self-driving” cars in Tomorrowland from the first day of this trip? It was so fun we HAD to do it again!

It must have been fun to wait in this huge long line, right?  Actually things moved along quite quickly and we were in our cars in hardly any time at all.  This time, E got to drive his own car.  L got to drive grandma again, all the time pronouncing what a good driver he was!  😀

As we were headed out of Tomorrow Land we stopped at the store for out free lanyards and pins.  E finally found some ears that he liked (Star Wars light-up ones).

Heading around the castle on our way into Story Book land, it was time for a pit-stop.  Tucked into the side of the castle was the restrooms.

I don’t usually take pics of bathrooms, but the doors inside this one caught my fancy.

A clever way to continue with the theme.

Storybook Land, like Tomorrow Land, is one of the iconic areas of Disneyland park. At least it is what I remember from when I was little, and I am officially classified as Vintage now.

You know we HAD to ride on the tea cups!  This is the first ride that E and I got to ride together, just us.  I’m not one for spinning rides either, I let E spin the cup and kept my eyes focused down until the ride was over.  It actually was super fun. E had put his ears away for this ride, but was sporting his storm trooper ball cap. The tea cup ride was extra pretty at night.

This isn’t the best pic of me, but it does show us in line to ride on Small World.  This was our last group ride of the day.  It is pretty iconic as well. Also, I had talked with a co-worker that used to work for Disney, before leaving for this trip.  He mentioned that the ride had Disney characters added into the countries where their stories had originated from.  It was an extra fun element to try and find them in each scene.

The night before, I had told the grandson’s that I wanted to buy them a balloon.  As a child, I had always wanted one of the clear balloons with the Mickey Mouse heads inside but had never gotten one. As we were leaving the park this night, walking through Main Street, we stopped and made the balloon magic happen!

Speaking of Magic… on our walk back to the hotel (about 4 blocks), we watched the fireworks.

Returning to the hotel at the end of a long and fun day was this guy:

He (or she, how does one tell?) was one of the gargoyles that ringed the balcony of the hotel.  I really liked all the small details that seemed to be everywhere!