This last past weekend found me doing something that I have wanted to do for the last 23 years, going snow shoeing. 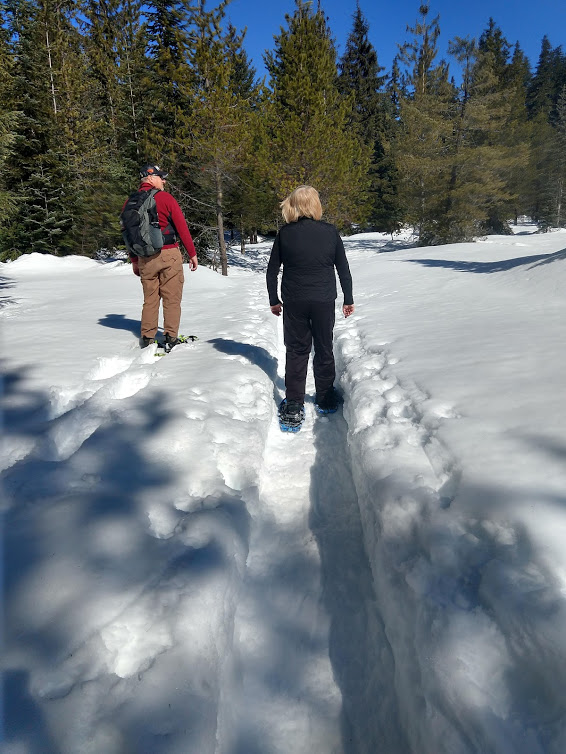 A friend, CK, at work said that I could go with her and her husband next time that they went.  The difficulty was finding a weekend that we were all available at the same time, while there was still snow in the mountains.  St. Patrick’s Day was THE day.

The trail was already packed down and the snow was “crunchy”.  It was a wonderful first experience.  I thought that it would be super hard, but it was more like hiking.  Just on top of the snow in slightly awkwardly large shoes. They did become more awkward if I stepped on my own shoes while walking, so I endeavored to keep that at a minimum.

EK, CK’s husband, kept urging us on by telling us that “it’s only a little bit further”. Eventually we made it up to the little cabin.

We stopped and had lunch of sandwiches, soda and chips.  At the top there was a snow-mere-man that someone had built.  It was super cool, even if his face had fallen away or already melted off.

The day was sunny and the temperature was around 70 degrees F.  The air temp alternated between cold and warm pockets.  It was super pleasant!  I definitely want to do this again next year!!

View all posts by momdussa

Post, news, diary... All the world around me, ALL THE WORDS AROUND YOU

Growing Up and Enjoying Life