For this project I used a modern commercial tissue pattern.  After cutting out all the pieces, I set to transferring the pattern markings onto the fabric.  This is the first time I have tried to use tailor tacks.  I had varying degrees of success.

For these tucks, not so much. I ended up using blue chalk to mark the little circles.  That worked just right!

I wanted all the raw seams/edges to be encased.  The quickest/easiest way is to make French seams. I know that many modern patterns are made to include 5/8″ seam allowance.  I really have not ever used this 5/8″ and until recently never understood the reason for so much allowance (to allow for later alterations). Making French seams takes care of most of the issues that I have with such large seam allowances.  I match wrong sides together, sewing 1/4″.

After seams are graded,

turn the gown wrong side out and sew another 1/4″ seam.  This encloses the raw edges of seams and looks very tidy.

As usual, I didn’t want to pause while sewing to take construction pictures.

After sewing the shoulder and side seams, it was sleeve time. The placement line for wrist elastic was marked with blue chalk. Cutting the elastic as per the instructions, I attempted to stretch it across the whole sleeve and just sew it down.  It didn’t reach the whole way across and the stitches looked like hell on the outside of the sleeve.  Going back to actually read the instructions… I found that casings were supposed to be made for the elastic.  Carefully removing the stretched elastic already sewn on and the very ugly stitching, I left the casing step for later.

Having prepared the first sleeve, I reached for the second.  It wasn’t there.  It wasn’t anywhere. I looked on all flat surfaces, behind the treadle table, on the trundle bed, behind the quilt frame, on the book shelf, and then checked most places a second time, some even a third time.  In desperation, asking DW to bring his eyes into the sewing room to help look (fresh eyes looking at a situation is often just the thing). Leading the way to the sewing room I saw the sleeve.  It had fallen into one of the dog beds, that are kept in there for my helpers’ comfort. Upon them getting in their beds, they had hidden the sleeve thus making it disappear entirely.

When I left the sewing room to get DW, Pixie and Walther had come with me, uncovering the sleeve. I saw it immediately when I re-entered the room. I was just glad I wasn’t losing my mind and I was able to continue on.

To make the narrow turned up hems at the neck, sleeve cuffs, and ruffle I used my favorite technique.  Running a row of stitches along the edge at 1/4″, made it very easy to use it to turn the raw edge once and once again.  Depending on where I am at the time,  I may top stitch the hem down using the machine or slip stitch the hem by hand.  (I love hand sewing, it is so soothing) After hemming the neck edge and the cuffs I attached the lace trim by hand on my lunch break. Due to time constraints, the machine was employed to trim the ruffle prior to gathering.

I suppose that French seams COULD be used in attaching the sleeves and ruffle, but fighting the bulk was more than I was feeling up to at that moment. The solution was to match right sides together and sew in the usual manner, grade the seams and flat fell the straight edge over the gathered one (more handwork! 😀  ).

Nearly done!  Remember those elastic casings that were supposed to be at the wrists? I was time. I rummaged through my box of sewing whatnots and guess what was in there?  Two lengths of narrow white bias tape!! Just the ticket for actually following the instructions.  Who knew?

After inserting the elastic, the ends of the casing was overlapped and finished by hand. At this point the construction of the gown was complete.  It looked so plain, being grey/white with white lace. Wine colored double faced satin ribbon was woven in/out of the lace. 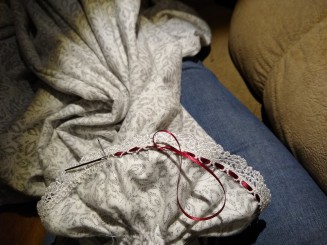 It was slow going because the ribbon would twist. Wanting to keep it flat, I would stop after each length woven in to straighten it out.

Nearing the finishing line on the bottom ruffle, this little area of unattached lace was found.  This halted the progress of the ribbon until the lace had been made secure. 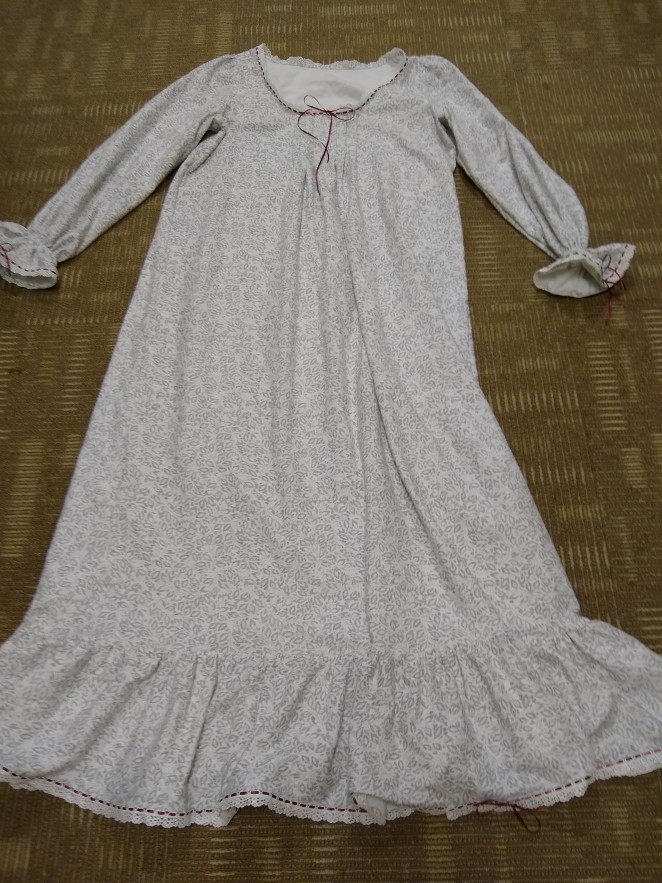 To my eye, the wine colored ribbon just finished it off!  Pretty and super-soft flannel make for a wonderful winter nighty!