Although I don’t mention it very often, I do other things than crafting.  This last weekend was second weekend of season for teaching motorcycle safety.  Upon arriving at the range, ice was observed, directly in the path of travel.  Not good.  In consulting with the lead instructor and On-call, a delay in riding time was agreed to.  Students headed for the classroom and riding was delayed for one hour to give the sun time to come up and melt the ice.  Now what to do for an hour?  Usually there would be a spare project in the car, no such luck.  Off to Walmart for yarn and needles.  A little time with Google for yet another vintage baby set pattern

(you can never have too many baby gifts in reserve).  The Lavender baby set was begun.

I have no allusions as to why people (at least this person) ends up with many multiple WIP’s (works in progress).  Actually I am more surprised when I am lacking for a project to work on.

Vintage patterns are written in vintage ways.  There is always a period of adjustment while learning to “read” the vintage pattern. As the pattern begins to make sense, I begin trying to “see” the pattern in the stitches and repeats. With this pattern it took me quite a while to really see these.  After getting through the increases on the first sleeve, it was fairly clear. The pattern is really 3 rows plain (knit, purl, knit) with the fourth row being the pattern row (p3, *p2tog, yo (repeat across row until last 3), p3), while keeping careful count to make the increases in the correct rows. Despite the pattern being fairly simple, I often found myself knitting and tinking.  Sometimes knitting one row and taking out more. Other times more progress was made.

After knitting each sleeve, the body of the sweater is knit all at once (left front, back, right front) 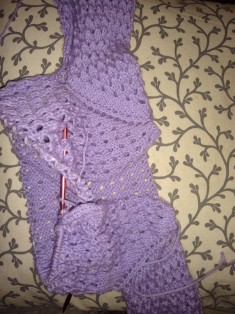 A lap of single crochet around each edge of the sweater followed by a row of double crochet.  This created a lovely and simple edge that keeps the sweater edges from curling up. 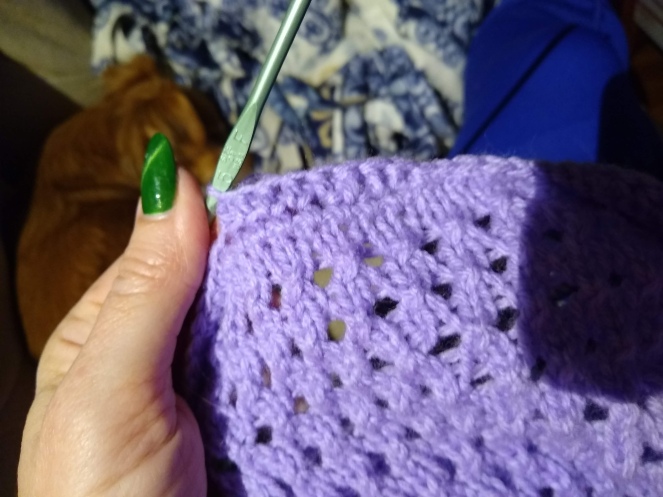 Because I have very little experience with crochet, I had forgotten how to make single and double stitches.  Between google and YouTube my lack of knowledge was alleviated. During the double stitch, as I rounded the last corner, I came upon stitch weirdness. This was caused by trying to work in the yarn ends as completing the single crochet row. sigh.  pulling out all of the doubles and most of the singles, I started again. The good news is that each time I started over (3 times total), my crochet stitches looked better and better.  At one point I set down the work and went to get something. Taking back up the hook and yarn I couldn’t figure out why it had been so easy a moment ago and now was really difficult.  A few minutes later I realized that I was holding the yarn in my right hand, as if I was knitting.  I was also holding the hook in my right hand (because I am right handed).  This made it much harder to crochet, especially keeping the tension even. I am glad I figured that out because the ends of the sleeves also needed the crochet edging.

On a lunch break I dived right in, trying to finish both sleeves quickly so as to move onto the cute little hat.  I was really having a hard time working the hook into the previous stitches.  I did pay attention to which hand the yarn was in.  I was holding that correctly. I struggled on.  About 2/3 of the way around I finally realized why it was so hard, I was double crocheting into the bound off knit edge instead of the row of single crochet.

Pulling it all out and beginning again (at least I have consistency), this time starting with the row of single crochet.  Boy Howdy that made all the difference in the world!  Much easier!! The second sleeve went much faster and easier.

Not taking the time to weave in the ends, I quickly cast on for the cute bonnet.

The bonnet worked up really fast!  I really like the 2×2 ribbing that is turned into a ruffle

The little shoes were interesting.  it started with knitting the sole of the shoe.

Then there was the upper part.  It started with “knit 3 rows”. Then knit 22 stitches, turn and work the pattern over 9 stitches before carrying on with the rest of the shoe.

Then create the tongue

Once both tongues were done, I was ready to sew the pieces together. That is when I discovered this:

Both were supposed to be knit in stockinette.  Apparently I was distracted by the television program that it was on at the time.  Snapping the yarn, I threw it in the garbage.  DW asked, “not even going to tink that? Not even going to frog that?”.  Ummm… NO!  It was really much easier to just knit another one. 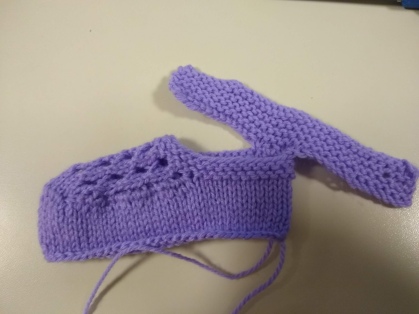 All better now and with the strap.  😀  I really enjoy working with vintage patterns because the construction and esthetic are so much different than what we are doing today.  With that said, the next step was to sew on the tongue of the slippers.

The slipper strap is fastened around the ankle and over the tongue.  Then the tongue is folded down over the ankle strap.

The booties needed the addition of a little white button on the strap to finish them. The one laying down is to show the strap and the tongue.

I had fun making this layette.  It was easy to do, once I learned the repeat pattern (only one pattern row, every fourth row). The only reason that I wouldn’t make this again is that there are so many cute vintage patterns and I am a reasonably slow knitter.

I still have the grey layette to finish.  Stay tuned…