I have been busy, I promise.  Let’s take a look at current and recent projects:

The nice thing about putting them into a bag is that they stay straight (as opposed to rolling about getting tangled with each other) as I knit directly from the bag. When finished with this project, the bag can be reused for a future project. 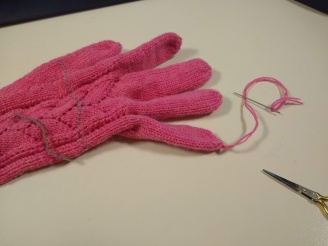 Having just finished closing up the end of the last finger, the glove needed to be turned to have all of the other ends worked in.

Another completed project was this muslin shift:

Aiming for the second picture on the pattern.  As always, it would have been easier if I only had one more hand. Sewing bird to the rescue:

“January: Timetravelling Garments: Create an item that works for more than one historical era, or that can be used for both historical costuming, and modern wear. It could be an apron that could do 1770s or 1860s in a pinch, a shift that can work under many decades of fashion, or a historical cape you also wear everyday, etc.”

I still need to submit this challenge to the group to really be finished.

Much work has gone into getting DW’s parent’s house ready to sell.  Physically hard work.  This path started out as a path of overgrown circles.  We didn’t even know it was a path and not stepping stones! Grass was pulled out from between the stones, the path edged and the bricks re-sanded. I think it looks pretty good.  The house was also emptied and completely repainted both inside and out (including trim). As you can imagine, this really cut into my workbasket time. 😉  There is already an offer.  Woot!

Our house was not to be ignored.  The old fence is being replaced by the new fence.  Making sure that the chihuahuas will not be able to escape under the fence.  I can’t claim the actual fence but I did help did the post holes.

“February: Re-Use: Use thrifted materials or old garments or bedlinen to make a new garment. Mend, re-shape or re-trim an existing garment to prolong its life.”

“February – Colour Challenge Blue: Make an item that features blue, in any shade from azure to zaffre”

I just realized that they both happen to be February.  2015 was the year that I discovered these challenges.  I completed several, but never did submit my completed challenge to the group.  I have lost weight and the skirt no longer fits.  Originally, the skirt had been hand-sewn which did make the seam removal much easier than if it had been machine sewn.

The waist band had to be removed before the side seams could be cut. 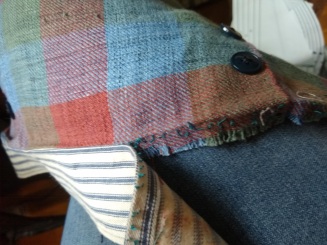 Once the waistband was off the seam binding on each side of each seam had to come off. It had been used to keep the seam allowance from fraying.

I typically use the blade on the rotary cutter to cut stitches that need to be picked out.  This is followed by a tape roller on both sides, removing the little threads. 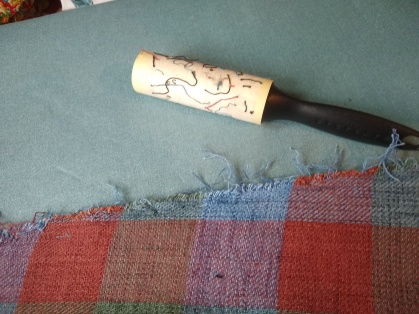 This usually works like a charm.  The fabric of this skirt is so loosely woven that the tape roller was really contributing to the fraying of the fabric. Putting the tape roller aside, I resorted to tweezers.

After sewing two times around both the front and back skirt pieces and the frayed edges were trimmed, the skirt was hung up to await the next step.  I need to find the instructions to get the order of operations correct.

While I was poking around I, accidentally started a new project. One of the summer dresses in this cute cotton print:

I would have finished it too… if there had been just 3″ more fabric with the print pattern in the same direction of everything else.

I was so delighted and excited to work on a project that could be started and finished in one day that I neglected to take any pictures of the early parts of construction.

While I can’t get in my time machine and rectify that oversight. I can take some pics going forward.  I’ll get right on that!