In our attempt to find a place to stay the night before, we missed a turn and went into the “old” town part of Red Bluff.  During the turning around and going back process, we passed a possible coffee location and an interesting breakfast option. So, our day began with a lovely walk to breakfast, of one mile.  On the walk, below the bridge we spotted this car that had driven across a shallow part of the river and out onto a little sand bar: 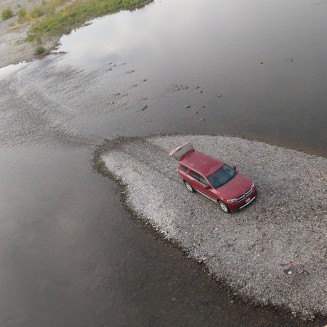 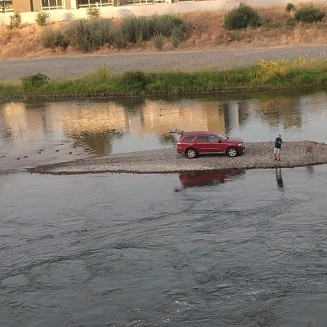 Where a man was fishing in the river.  He had two folding camp chairs all set up, but we didn’t see a second person.  I smiled and waved.  The guy waved back! 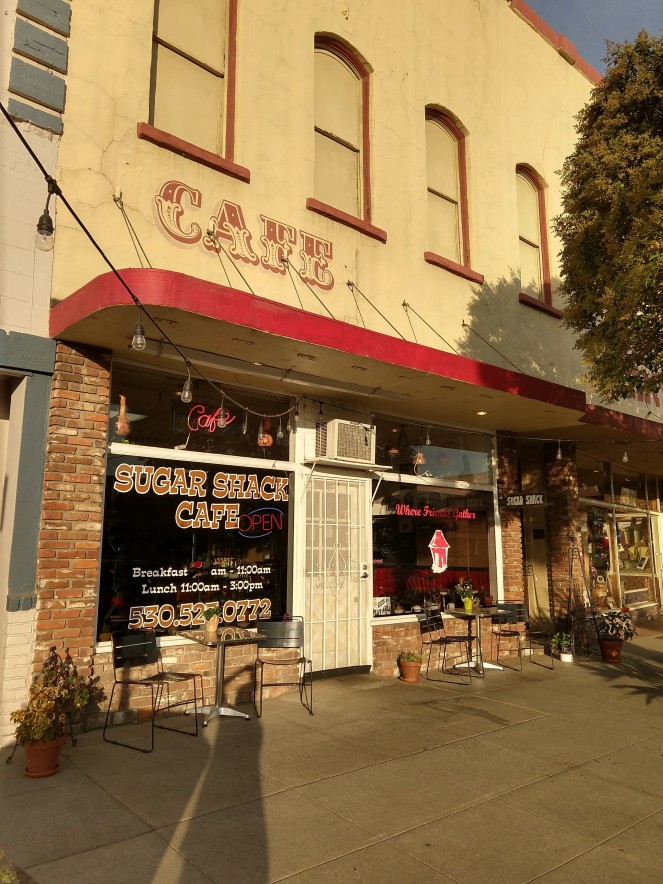 Breakfast was at The Sugar Shack Café. As we walked in, we were encouraged to sit wherever we would like.  I spotted this sign: 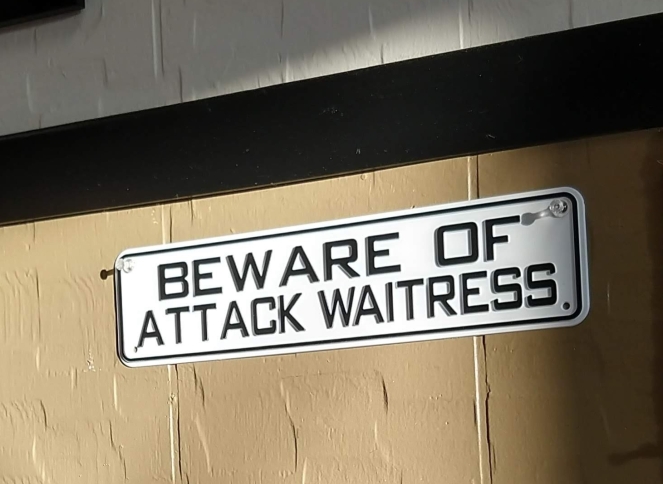 Then the waitress arrived… 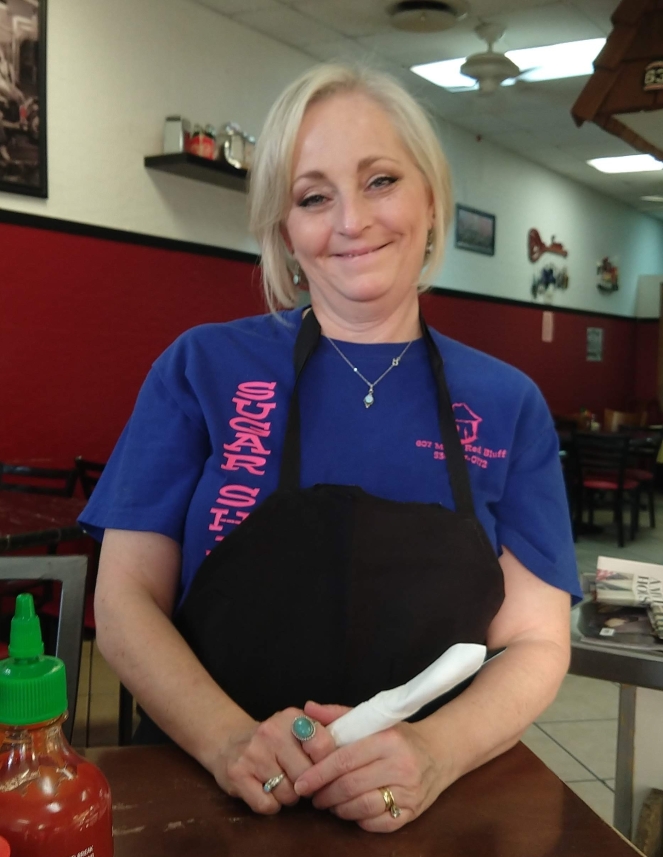 She wasn’t at all scary and she wasn’t just a waitress.  She is Tammy, the owner of this wonderful establishment!  We had arrived on her one year anniversary of taking ownership after ten years of dreaming of owning this very place! 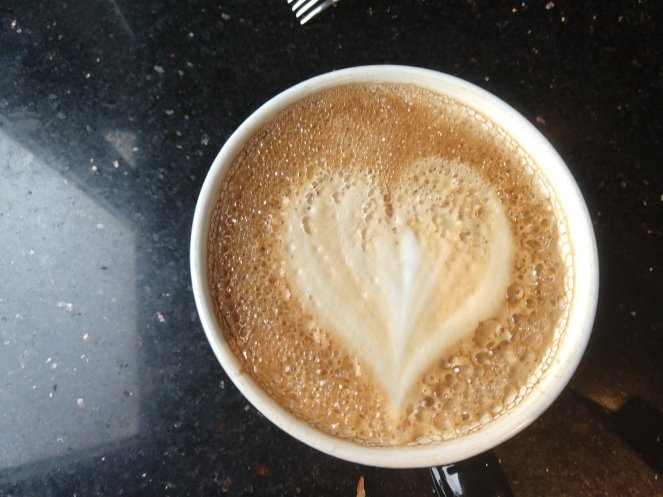 Before she took over here, she had been in corporate America.  Then she broke both of her legs and she decided she wanted to do something that she really had a passion for.  The planets aligned and the previous owner was finally ready to retire, thus making Tammy’s dream come true. 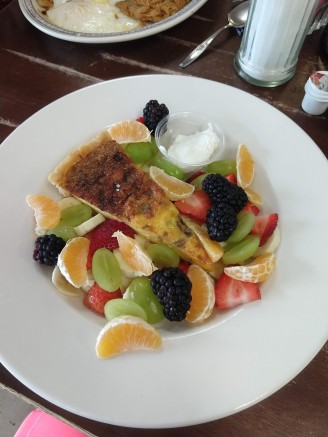 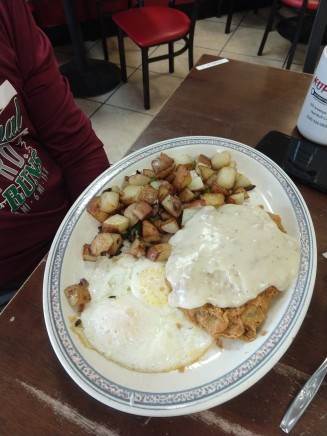 She knows what’s what in the kitchen too!  I had the “Cowboy Quiche” and DW had the chicken fried steak with egg, country fried potatoes and gravy.  Breakfast was even more delicious than the pictures are beautiful!  The quiche was larger than it appears in the picture.  The hugeness of the blackberries make it appear smaller than in real life.  In every bite, I could taste the egg, the cheese, the caramelized onions… Let’s just say the quiche was amazing. The crust was flakey and tasty and wonderful (for me, the crust is always where its at)! My mom used to make quiche all the time when we were growing up.  All quiche is judged by hers.  Mom, you would have loved this quiche! The chicken fried steak cut with only a fork and the gravy… is frequently recommended as the best in town by waitresses working at other establishments.  It is  SPECTACULAR gravy, just say’n. All of her food is made from scratch.  This place is amazing, you totally need to put it on your list of places to stop.  Maybe even make it a destination stop, on your next road trip.  We couldn’t stay all day visiting with Tammy.  Eventually we had to leave and head for Covelo.

When we finally got there, we stopped in front of the post office where we met Rebecca. 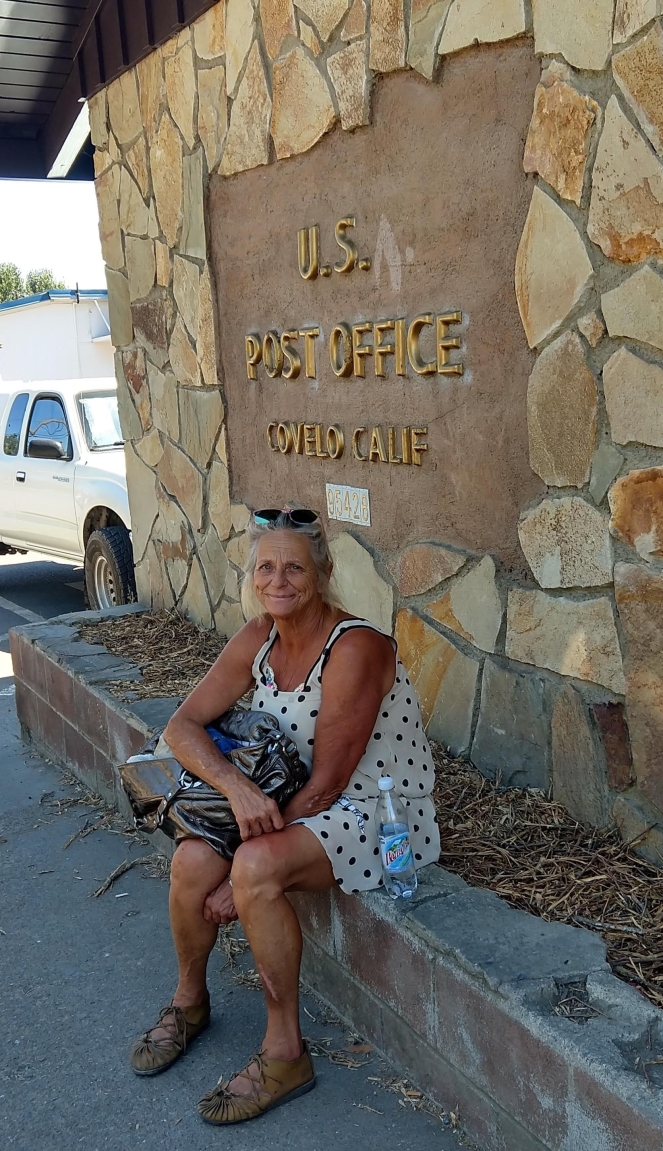 She was super friendly!  She told me that she was getting ready to sell her house to travel all around the US, to every state, while doing a radio broadcast called “Where the Heck with Beck”.  She would be working with KYBU – The Raven radio station.  How cool is that?!  This has been her life long dream! At this point, I decided that this was “The Day of the Dreamers”!

From here we stopped in Gaberville for gas and ice cream.

Then, onto the Lost Coast Highway.  Here is what Wikipedia says about it:

“The Lost Coast is a mostly natural and development-free area of the California North Coast in Humboldt and Mendocino Counties, which includes the King Range. It was named the “Lost Coast” after the area experienced depopulation in the 1930s.[1] In addition, the steepness and related geotechnical challenges of the coastal mountains made this stretch of coastline too costly for state highway or county road builders to establish routes through the area, leaving it the most undeveloped and remote portion of the California coast.[2] Without any major highways, communities in the Lost Coast region such as Petrolia, Shelter Cove, and Whitethorn are isolated from the rest of California.

The region lies roughly between Rockport and Ferndale. At the south end, State Route 1, which runs very close along the coast for most of its length, suddenly turns inland at Rockport before merging with U.S. Route 101 at Leggett. At the north end, State Route 211 begins its journey at Ferndale, heading towards Highway 101 in Fernbridge. Section 511 of the California Streets and Highways Code still says that “Route 211 is from Route 1 near Rockport to Route 101 near Fernbridge”, but it is unlikely that the portion south of Ferndale will be built. Most of the region’s coastline is now part of either Sinkyone Wilderness State Park or King Range National Conservation Area.”

This was the second time that I had ridden on this stretch of road.  The last time was my very first year of riding on my very first motorcycle (A shiny black Seca II called “pinky”).  I was excited to ride it again this year to see how far my skills had come.  What Wikipedia doesn’t clearly mention, is that this part of the highway is not maintained very well.  There are MANY challenging parts of the road where it is paved and where it is not paved.  This time I was on a bike more suited to this type of riding.  And yet, I found myself much more cautious of a rider. The first time, I didn’t know what I didn’t know.  Too new of a rider to know what I should be scared of.  Interesting what perspective does for one.  The last time we road this (13 years ago) we went from North to South.  This time, we started South and headed towards Ferndale.  With the speed that the fog was rolling in, the further North we got, we were relived and glad to finally make it in Ferndale, before it also got dark.  For today’s ride, we saved the dark part for heading into Eureka, where we would be stopping for dinner and for the night.

Dinner was at the Lost Coast Brewery, of course!

We sat at the table directly behind the hostess station, near the front door.  As the door opened and closed, this lovely lady (I am assuming here, because of the lipstick) would raise and lower directly over my head.

We were COLD and HUNGRY!  Forgot to take pictures of the wonderful food before we started eating but this is what we had: 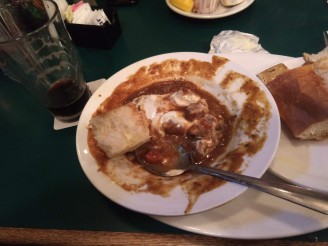 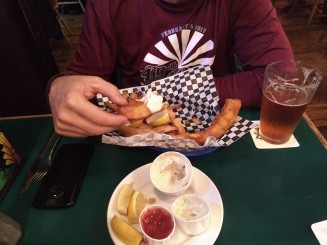 To put the cherry on the top of our food coma:

I did mention that we were HUNGRY…

Discover ©SK's 🆆🅴🅴🅺🅻🆈 🅵🅻🅰🆂🅷 🆂🅰🅻🅴🆂 on our Site | We offer unique graphics and artwork designs on T-shirts, Apparel, Mugs, Bags, Posters & Prints and much more gifts for Whole the family, our T-shirts are available in a huge variety of styles, sizes, colors and designs for all kinds of occasions.

If I Had My Own Blue Box:

Adventures in the Nineteenth Century, and maybe a little beyond -- Anna Worden Bauersmith's Blog