While on the 2019 summer motorcycle trip, we stopped at Ocean Waves Quilts in Eureka, California.  Travelling by motorcycle doesn’t leave much room for impulse purchases.  One that I made room for was the Cactus Wall hanging project. The other was two fabric panels by Ann Kelle for Robert Kaufman fabrics.  One panel had four friends and the other had their accessories  (while looking up the links for you, I discovered that there is a third panel in this group, with three more friends! Do I or don’t I? hmmmmm).  The dollies instantly brought two of my dear friends to mind and a third could have been me. Fabric folds very flat and there was PLEANTY  of room in my top case for these.  They languished in my sewing room while I did many other things.  Working my way through unfinished projects I found them again.  It was time to bring them to life. 😀 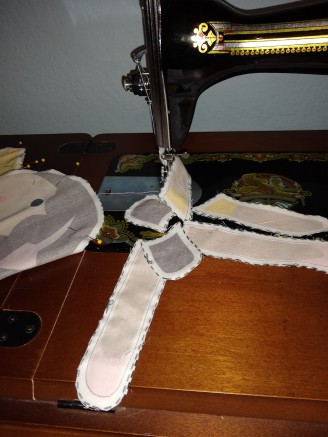 To please myself, I opened up my treadle machine.  The instructions said to sew a 1/4″ seam.  I used the “scant 1/4 inch” presser foot, sewing all the pieces chain style.  Grabbing the whole stack, I head the sofa for turning and stuffing. Before turning the dollies right side out, the rounded edges needed to be cut, especially the dollies.

Snip-snip-snipping around all curved edges caused my lap to be full of tiny triangles.

Once pieces were right side out, the stuffing began. A little ways into using my pinky finger to poke stuffing through the little hole, I found a chopstick in the middle of the bag of fluff! DW said he was pretty sure that it was a stuffing-poking-stick (It also came in handy to unclog the funnel when filling the Boutis Sachets). As you may have read, the sachets had gotten put aside to finish the Gson’s Christmas sweaters. Well, the dollies got set aside to be able to finish the sachets on time (a vicious circle indeed).

I haven’t ever mentioned that we are living in a lengthy (3 years, so far) remodel project.  Among other things we are fitting out the basement into a cute “apartment” for DW’s parents.  Most of my spare time goes to helping out (when I am not running, working out at a gym, sleeping, cooking, eating, cleaning, or all the other things that fill my days).

Recently I picked up LB’s daughter from the airport.  With travel time and visiting time the day flew by!  Before I knew it, it was time for her to leave.  :’-(  There wasn’t any sense to go to work in the little time that was left of my work day.  So there I was, with free hours to spare… into the sewing room I went!

The dollies had been finished and all the accessories had been sewn, but not turned and stuffed.  There was still the skirt, capes and mermaid tails to whip up.  This I did and then back out to the sofa for turning and stuffing. I also decided to add a running stitch to outline the printed designs.

I am pretty pleased with how everything turned out, although I still haven’t made up the fourth dolly. I had made up all the little extras and divided them up between the four dollies. 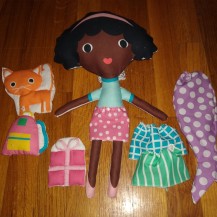 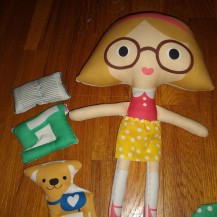 There were only two mermaid “skirts” so LB and MJ got those.  LB has a birthday in December so she got the present and the kitty represents her grand-cat (even if it isn’t black).  On the original panels, each of the dollies came with a little bio-square.

I folded them up and attached them to the back of each doll’s head.

I carefully packaged them up and sent them off to their new homes.  Yesterday I got a phone call from LB… Her’s had arrived and she was delighted with her.

View all posts by momdussa

Post, news, diary... All the world around me, ALL THE WORDS AROUND YOU

Growing Up and Enjoying Life