We got up and went running again this morning. I was limping at the beginning of the run until my muscles warmed up. It was much better by the end of our run but, not surprisingly, today’s run was my slowest yet. We both came back very damp from the cold foggy/misty air. Even my glasses were wet enough that it was hard to see. Traveling can often be bitter Sweet. Some things remain the same and others change. Traditionaly, on our past trips, we have breakfast at The Lighthouse Harbor Grill. All of our breakfasts always start with coffee, of course, which is followed up with an order of a basket of deep fried artichoke hearts. Since our last visit, the restaurant had changed ownership and this was no longer one of the offerings. DW’s Breakfast of choice is huevos divorsiados. He has been looking forward to this for the last six years, ever since our last trip. He has tried many other restaurants’ versions of this dish and has always left disappointed. Not today!

We decided to only take one bike to the track. I would ride pillion behind DW. He is a wonderfully smooth pilot. It is a joy to ride with him. But, we had one more stop before heading to the track, the Panaderia in Castroville. As we were choosing our treats for the day a Spanish speaking momma and two children came in. The little girl took a huge deep breath and said, “mmmmmmmmmm”. You know what? That is pretty much the same in every language. So then I am standing there with a big silly grin on my face waiting for our turn to pay.

Because we started heading towards the track from Castroville, we took the familiar route that we’ve taken in the past. As we were passing a traffic signal, both of our heads swiveled to the left and watched as we passed by the turn into Fort Ord. The stop light was new.  The less steep, widened and paved entrance was also new. We hadn’t recognized the entrance in its new and improved state. We went up the road to next street and made a U-turn to head back. That is when we realized that a whole new housing development had been built since our last trip. Starter homes were going for a mere $400,000.

The new pavement doesn’t go too far into the old Army base, but the old roads are still in pretty good condition. The rest of the ride in was as we remembered it. We headed to a paved parking area. With the addition of side cases and the usual top case, there was plenty of storage for our riding gear. We only had to leave our helmets with the Veterans running the gear check tent. 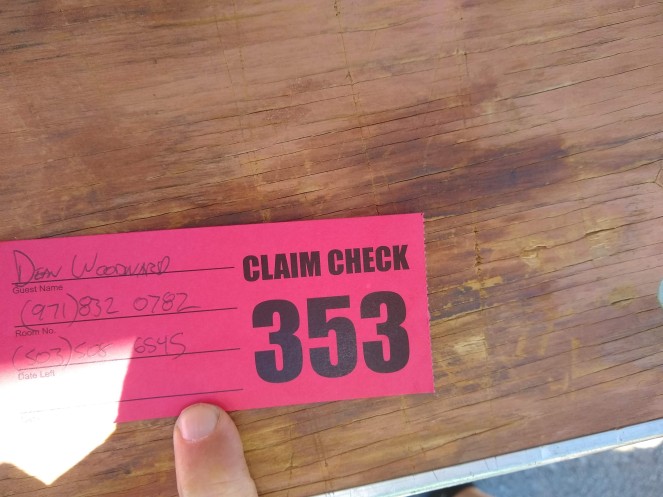 First order of business was to get MORE coffee.  While waiting for the barista to complete our order, I saw this super cool basket:

Going to Laguna Seca isn’t just about watching the races. There are vendor booths for all sorts of products. T-shirts, riding gear, ear plugs, sun glasses, art, multiple types of pain relief methods AND motorcycles!  All kinds of motorcycles:

Then, what to my wonderous eyes should appear?

The Yamaha Niken, three wheeled bike.  What is so special about another three wheeled reverse trike you might ask. Well… the front tires actually lean!  I hadn’t been specifically looking for this bike, even though I had just watched several videos on it last week.  I was super excited to see it.  In talking with the Yamaha guy, I also found out that they had two in the line up of demo bikes.  Although the demo roster was full for today, we could show up at 8:00am tomorrow and get on the list.  WHOO-HOO!  There were rules for demo rides:

We decided to where all of our gear, despite the relaxed standards.  😉

We decided to go straight from the track to dinner. This would minimize the number of times that we get in and out of our riding gear.  The plan for tonight… Phil’s Fish Market. We “discovered” Phil’s, a couple of years ago, at the same time as the whole TV audience if they had watched the episode of Diners, Drive-ins and Dives. This is someplace that we had eaten at before and really enjoyed.  Definitely worth the challenge of finding parking and the wait in the long line. As we were waiting in that long line we might have been tempted by this local delicacy:

OK, not really.  I’m sure they are delicious, but I wasn’t feeling that adventurous.

This is what we did have: 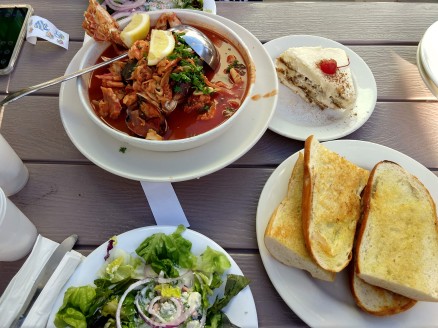 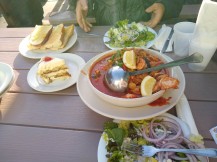 With salad and garlic bread 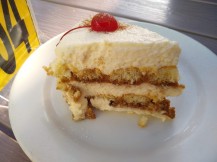